The Covert of Thy Wings was a long time coming. I’m not exactly sure when I started working on the idea, but I’m pretty sure it was not too long after I finished Mine Arm is Lengthened Out back in 2002. I went in and out of working on this piece from then until I finally finished it the summer of 2004. I was hoping to create a concert piece more appropriate for a larger choir, like the BYU Concert Choir. But unlike some of the other pieces I have written, I really struggled generating some of the musical ideas I needed for some of the sections, as well as putting it all together and making the piece really work.

The turning point was when I showed a couple of other pieces ( Awake, My Sons, Awake and Riddles in the Dark - which is unpublished due to rights issues) to Rosalind Hall, the director of the BYU Concert choir. At the end of the meeting, I mentioned that I was in the middle of writing a piece that I hoped Concert Choir would perform and I explained that the text was from several excerpts from the Psalms. She immediately perked up and said that she was planning to do a set of psalms the next school year and still needed another piece. She asked if I could show her what I had to that point. I somewhat reluctantly agreed. Upon hearing the very rough draft, she said that she had to have it and to hurry and finish it! That was what I needed to spur me on, and even though it took a lot of time and effort during nearly the whole summer, I finally finished it. The Concert Choir performed it at the Assembly Hall in Salt Lake City in February 2005 and again at their spring concert in March. 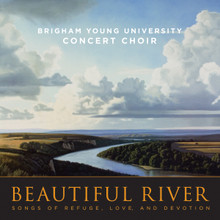 After the March concert, Dr. Staheli approached me and asked me how I felt about the ending. I had been a little unimpressed with the performance of the ending, but had chalked it up to interpretation. Dr. Staheli pointed out that it was probably more the writing than the performance. We talked a bit more about it and determined that the phrase before the big ending needed to let down so that the piece could build back up to the big ending. Over the next couple days, I worked to strengthen the ending and get the music reprinted. Rosalind Hall was planning to include this piece on the Concert Choir CD that year, and I hesitated to ask her to have the choir relearn the ending. But I did anyway and she agreed. They just had time to have a couple quick rehearsals on the new ending before they were scheduled to record. In the end things worked out great and The Covert of Thy Wings was included in their CD, Beautiful River released in 2005.

Note: the CD has the piece incorrectly listed as “ The Covert of His Wings.”

One other note: After having lived with this piece for awhile, I believe that both the length of the piece and the two-piano accompaniment make it pretty unapproachable for many, if not most choirs. I have felt more than once over the years that I should take the time to shorten the piece somehow and reduce the two-piano accompaniment to one piano, four-hands. But since someday is not a day, it hasn't happened yet :)

Here is an excerpt:

Hear my cry, O God; attend unto my prayer. (61:1-4)
From the end of the earth will I cry unto thee,
When my heart is weighed down;
I will cry unto thee.

For thou hast been a shelter for me,
And a strong tower from the enemy.
I will abide in thy house forever:
I will trust in the covert of thy wings.

Get the latest updates on new products and upcoming sales